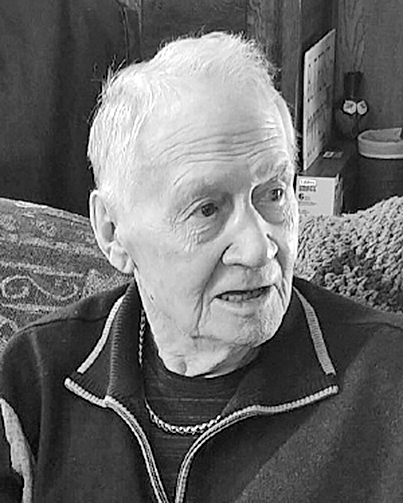 It is with great sadness and love that our family announces the passing of our father, Chip Erhardt, on Thursday, Aug.19, 2021, at the age of 89 years.
How do you summarize a person’s life in a few short paragraphs?
Chip was born on May 1, 1932, to John and Karolina (nee Meyer) Erhardt, being the youngest of nine children. His childhood was filled with family life, schooling, hockey, friends and music, being a trumpet player in the later years of his education.
Chip was a scrawny kid in his childhood years and was placed on a milk program by the school, thinking that he lacked the nutrition of milk, until the school found out that he drank plenty of milk from the family’s cow in the backyard. His long, lean, body build has hence been passed down to some of his children and grandchildren.
As a passionate and talented hockey player, Dad was invited to the Detroit Red Wings rookie camp in 1950 that was held in Winnipeg. The camp was a personal success, and he was invited back for the main camp in Detroit but declined, stating he had a steady job with the CNR that he didn’t want to jeopardize.
Chip had a love for style and clothing and always tried to look his best. We affectionately called him a “Dapper
Dandy”. As a young man, he worked part time in a men’s store in Melville called The Top Hat. It was there that he met a beautiful, young woman named Vivian Carlson. Their courtship led to marriage, and they were wed Aug. 1, 1956.
Chip was the major bread winner in the family. He was very proud of and thankful for his 39-year career as a conductor on the CN, which he eventually retired from in 1990. He also moonlighted with a cleaning business and as
Legion manager for a number of years. In his early married life, he raised cattle with his father-in-law near the community of Reserve.
Viv and Chip had a busy family life raising three children who were very involved with school, sports and music. With Chip’s love of sports and competitive spirit, he avidly coached hockey and baseball for many years, with Viv being his statistics gal.
Chip and Viv spent all their summers at the family cottage located at Crooked Lake in the Qu’Appelle Valley. It was at that location where many friendships, memories and love of the lake were developed. Their children took swimming
lessons, were allowed friends who stayed over for days on end, climbed hills, roared around the lake in boats, fought off the itch, and played endlessly with other children of nearby cabins and beaches. Strong friendships were built which
remain to this day. After Viv’s passing, Chip eventually sold the cottage to his daughter and son-in-law.
In 1991, retirement opened up an opportunity in Chip and Viv’s life. Their entrepreneurial spirit arose, and they took a leap of faith to buy a small franchise restaurant in Penticton called Grandma Lee’s. With a huge learning curve, they ran and operated the restaurant with their youngest son for five years. They loved Penticton, made new friends, had many experiences, but found this industry wasn’t for them, so they sold and moved back to Melville. Their son stayed on in
Penticton, so every year for the month of September, they travelled back to visit family and friends.
Grandchildren started appearing, and Chip was only too happy to be involved in their extracurricular activities. He drove his grandchildren to hockey, ball, music lessons, picked them up from school, went to volleyball and basketball games, attended all award nights, graduations, and was their most avid fan in the hockey rink, ball field, school gymnasium and music festivals. He was truly a proud grandpa. He was thrilled to death to be blessed with great-grandchildren and bragged how smart and funny they are.
After Viv died, he filled this void by attending church and developing friendships at local coffee shops, which he immensely enjoyed. Stories were told and shared, and laughter and healing were attained.
Chip was a kind, generous, and charming human being, but, like all of us, he had faults. He could be difficult, and he had absolutely no filter. As a family, we learned to accept this, and laughed and sometimes were horrified at his blunt comments. But that was our Dad, we loved him and will miss him and all his stories dearly.
Love,
Crystal, Gord, Reub, and families
Chip leaves behind: his daughter, Crystal, and her husband, Randy Karius, of Melville and their children, Catlin and his wife, Jess, and their son, Wyatt, of Perth, Australia;
Addison and his wife, Kelsey, and their children, Kaiden and Halie, of Melville; his son, Gord, and his wife, Laurie, of
Melville, their children, Andrew and Sean, of Melville; his son, Reub, and daughter-in-law Rhonda, their children, Kalen, Carson and Elisa, of Penticton; sister Emy Krauser of Pine Lodge in Yorkton; and extended family, many friends and
acquaintances from all over.
Chip’s funeral service was held Wednesday, Aug. 25, 2021, at First United Church, Melville, with the Rev. Brian Mee officiating and Shirley Blakley as the organist. Chip’s son, Gord Erhardt, offered memories on behalf of the family, and the urn bearer was son-in-law Randy Karius. Interment followed in the Melville City Cemetery.
Arrangements were entrusted to Matthews Funeral Home, Melville.