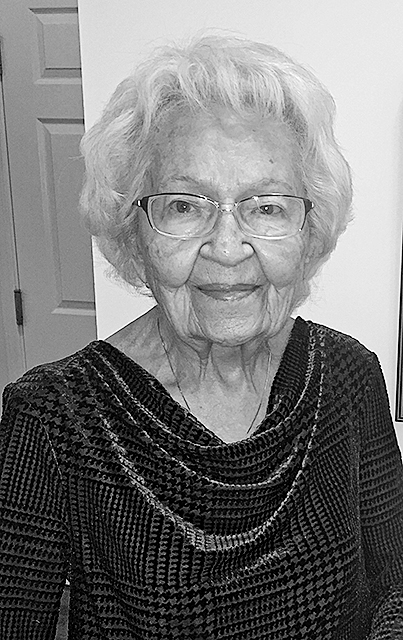 Sophie was the eldest of three daughters born to William and Nellie nee Kravich) Kostyshin in Melville, Sask., and lived until five days before her 98th birthday.
As a young girl, she attended Melville’s St. Henry’s RC School. Her early love of music included playing guitar and singing in her school and church choirs, as well as the Plain View Church choir. It was there that she met her husband to be, John Borys of the Fenwood district.
Sophie and John were married at St. George’s Ukrainian Catholic Church in Melville on Sept. 28, 1941. They were active with that parish and mom remained a member for almost 80 years. Having a wedding during the Second World War meant white lace was rarely available, so mom’s lovely wedding gown and veil were a unique pastel coral color.
Mom and dad raised three daughters: Joan (Robert) Hale of White Rock, B.C., Geri (Blair) Taylor of West Kelowna, B.C. and Valerie (Robert) Milne of Toronto Ont. and Naples, Florida.
Being a talented homemaker and accomplished seamstress, mom loved to sew. Her girls and others benefitted by having new outfits sewn for many occasions. Mom was also very creative in knitting, petit point, and belonged to the Melville’s Quilters Guild. She won awards for her beautiful flower gardens and landscaped yard. Typically, our home would be filled with music and mom’s beautiful soprano voice. She taught us how to harmonize with her, and also along with favorite songs on the radio, especially while doing the dishes and always on the many family car trips.
Family vacations were a must for mom and dad every year. They included frequent visits to relatives, with destinations from British Columbia to Ontario and various United States locations, including Florida and Hawaii. Sophie was an avid bowler and shuffleboard player. Shelves were filled with trophies. She took pride in belonging to the Melville Square Dance Club, in volunteering with the Melville Horticultural Society, St. Peter’s Hospital Auxiliary, Thrift Shop, St. George’s Ukrainian Catholic Women’s League and choir, Yorkton St. Mary’s Ukrainian Church choir and the Melville Seniors Club.
Mom’s Christmas festivities went on for weeks to include Ukrainian Christmas and Malanka. Dinners of fabulously delicious food were rotated at homes of parents, siblings and cousins. Evenings would not end before several games of cards were played. Her Ukrainian heritage was cherished and well celebrated.
Mom had the courage to take up driving at the age of 65. She loved driving her car, kept it spotless and drove until she was 88. Dad passed away in 2003 and mom took over running her house and garden on her own, as her children lived out of province. In 2010, she moved from her beloved home in Melville, leaving behind many family members as well as lifelong friends. The move was a big adjustment but with determination, she established herself as an active resident at Westwood Independent Retirement Residence in West Kelowna. There for almost 10 years, mom made new friends and involved herself in many of the social activities. She helped to establish the Westwood Chimes Choir. Mom also maintained a little garden and her balcony was filled with pots of flowers.
In August 2020, following the need for a rehab hospital during the Covid-19 pandemic, mom was moved to the Evergreen Care Home in White Rock, closer to her eldest daughter. She resided there for almost six months until her passing on Friday, Feb. 5, 2021.
Sophie is predeceased by John, her husband of 61 years; her parents; and her younger sister, Val Sastaunik; John’s parents, Stephen and Catherine (nee Zinchuk)
Borys; dad’s siblings and their spouses: brothers, Bill (Mary), Nick (Anne), Peter (Sophie); and his sisters, Mary (Mike) Dubiel, Nellie Borys and Ann Borys.
She leaves to remember her: three daughters and their husbands; her grandchildren, Tiffiny (Jason), Brent, Kristin (Adam), Alison (Zack), Whitney (John); great-grandchildren, Ty, Tate, Sophie Oona, and Theo; as well her youngest
sister, Wilmarie (Lloyd) Sastaunik; brother-in-law, Art Sastaunik; and numerous nephews, nieces, cousins and friends.
Almost 98 years of living and leaving an indelible mark in so many lives she warmly touched, Sophie will be fondly remembered and loved for all she gave so willingly. It is with heartfelt sorrow that we say goodbye to our loving mother, Sophie Borys.
Mom’s wish was to be buried next to dad in Melville. Due to Covid-19 restrictions, funeral plans will be announced at a future date.
Arrangements are entrusted to Bailey’s Funeral Home in Melville.
In kind remembrance of Sophie, notification of charitable donations, mass offerings to St. George’s Ukrainian Catholic Church or Memorial Fund are in care of Bailey’s Funeral Home, Box 2729, Melville, Sask. S0A 2P0.